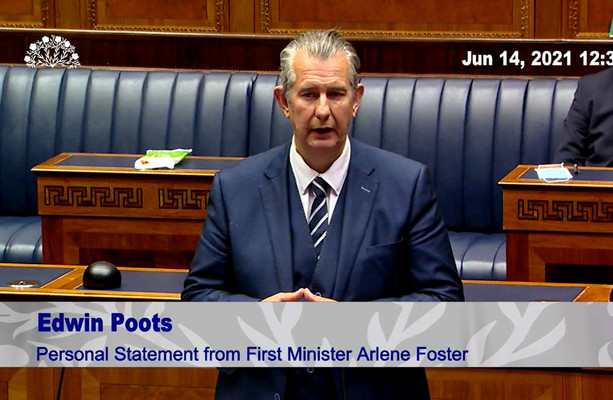 A WEEK IS a long time in politics, so goes the saying. Well 21 days is the new week.

After a short snap as leader of the Democratic Unionist Party (DUP), Edwin Poots has announced he is resigning. He will stay in the role until a new leader is chosen by the party.

Here are the crucial events that have lead up to the extraordinary political development.

The ousting of Arlene

Arlene Foster during a press conference outside Parliament Buildings at Stormont on the National Day of Reflection.

Foster’s leadership came under a quick and swift attack at the end of April after a significant majority of elected DUP representatives in the Stormont Assembly and House of Commons signed a letter of no confidence in Foster’s leadership.

“Stories on leadership come up from time to time, and it’s one of those times,” Foster said the day before she announced her resignation.

There had been growing discontentment with Foster’s handling of Brexit negotiations and the Northern Ireland Protocol – namely, that she hadn’t been taking a hard enough line on those issues.

The DUP has been coming under pressure from the wider loyalist and unionist community for the introduction of an Irish Sea border, and other societal issues.

On 28 April, Arlene Foster said that she was to step down as DUP leader, and as First Minister of Northern Ireland.

Foster later said that she did not see the leadership challenge coming, and questioned whether the reported letter was real, after saying she had never seen the letter or spoken to anyone involved in the coup. 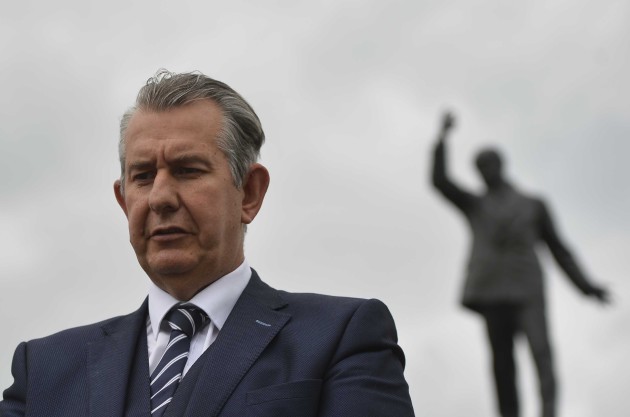 He was elected by the party’s 36 members elected to the Northern Ireland Assembly (MLAs) and House of Commons (MPs), by 19 votes to 17.

Donaldson’s pitch was seen as the more moderate of the two candidates with Poots hitching his bid to more traditional and hardline unionist voters.

Poots also said he would split the roles of party leader and Stormont first minister, with the same person not being allowed to hold both roles.

But because of the nature of how close the leadership race was, some commentators have suggested it forced Poots to take a more hardline approach to politics than had been expected – like taking a swipe at Tánaiste Leo Varadkar and Minister for Foreign Affairs Simon Coveney. 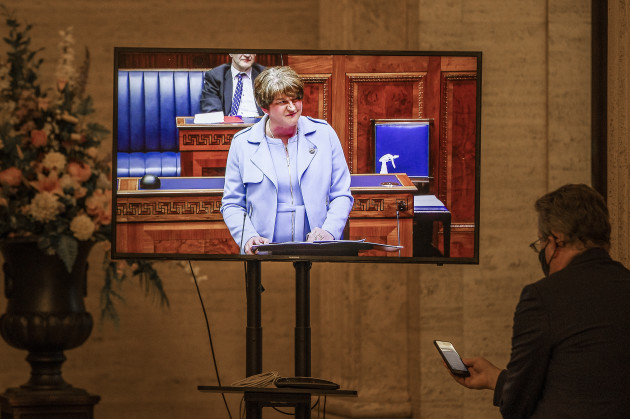 On Monday 14 June, Arlene Foster gave her farewell speech ahead of the appointment of a new First Minister.

Making her resignation speech to the Assembly chamber, the ousted DUP leader said her time as First Minister may have ended “abruptly” but she vowed to pursue “unfinished business” in championing Northern Ireland in other ways.

During her speech she addressed the row over the Irish language that threatens to destabilise the powersharing administration in the wake of her resignation.

And guess what happened?

A row over the implementation of an Irish language act was kicked back into the spotlight, with DUP minister Paul Frew warning that any UK government intervention over the issue risked destabilising Northern Ireland’s devolution arrangement.

The Stormont Assembly was on hiatus for three years after a row over the cash for ash scandal and the implementation of an Irish Language Act. 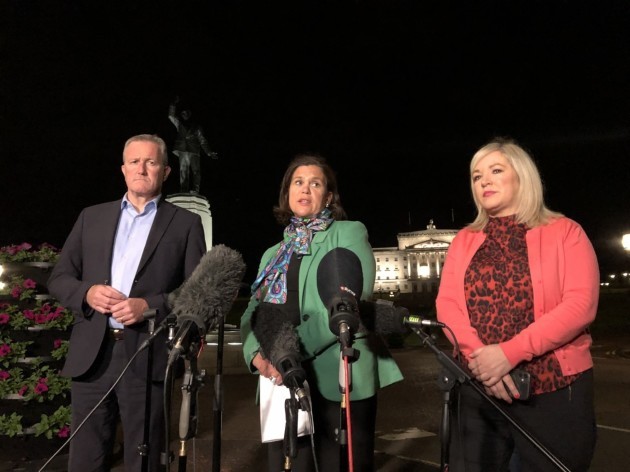 On Monday, Sinn Féin took an unusual decision to call on the British Government to intervene in the row and pass the act – effectively bypassing the requirement for agreement from the DUP.

While Poots had vowed to implement all outstanding aspects of the 2020 New Decade, New Approach deal that restored power-sharing, he declined to give Sinn Féin a specific assurance that he will move on the language element of the NDNA deal in the current Assembly mandate.

In response, Sinn Féin had suggested that the party would not nominate for the position of Deputy First Minister if it did not receive assurances that commitments made to pass Irish language legislation would be acted upon – collapsing Stormont once again.

In a post-midnight deal, the UK government committed to passing Irish language laws in the autumn if the Stormont Assembly does not do so before then – in the hope of avoiding another collapse of the Executive.

The significance of that deal

The British Govt has tonight agreed to legislate for Acht Gaeilge. This is the only way to break the cycle of DUP obstruction of rights. Sinn Féin will nominate @moneillsf as Deputy First Minister. We have important work ahead.

Sinn Féin leader Mary Lou McDonald said this morning that the deal with the British Government was necessary to stop the DUP obstructing the Irish language act.

“For a very long time the DUP has sought to frustrate these rights and that is most unfortunate, it’s also unacceptable and tonight we have broken through that logjam of DUP obstructionism.”

“We have unfortunately no common ground with the DUP on the matter of rights and this isn’t just on Irish language, this has been also the case in terms of marriage equality, in terms of women’s rights,” McDonald told RTÉ Radio’s Morning Ireland.

The common ground we wanted with Edwin Poots and the DUP was an agreement that this legislation could as planned and agreed come through the Assembly and the Executive. That’s what should have happened.

No news is bad news
Support The Journal

“They made it very clear to us that that was not going to happen. They refused to do that and that’s not going to change between now and October and therefore we took the initiative and went to the British Government.”

Once the legislation is enacted by Westminster, “we expect that [language] commissioners will be in place by March 2022, perhaps even earlier than that, but certainly within the mandate of the current Assembly”.

A bruising shambles of a day

Later on today, members of the DUP had been publicly and privately expressing their unhappiness at how the Poots leadership handled the Irish language agreement.

Breaking :
Senior DUP source tells Nolan Show Peter Robinson’s thinking is that Poots should have been prepared to demand all NDNA & protocol change or walk from assembly.
No way British government would have let this happen so close to marching season, I am told .

Ahead of the meeting of the Northern Ireland Assembly at 12pm today, a bruising internal meeting of DUP representatives took place, at which a sizeable majority of MLAs and MPs reportedly voted against Poots’ intention to nominate a Stormont First Minister.

Senior DUP MPs and peers in the House of Lords had written to Poots expressing concern, and urging him not to nominate a First Minister until he consults with them.

Senior DUP source has told me the party officers are meeting this afternoon in a scheduled meeting .
Told me a vote of no confidence in Edwin Poots could , theoretically , be raised then .
Source said “ the party is uniting for the first time in a long time ….against Edwin”

But, in a sign of tensions within the party, Poots and Givan left the room to head for the chamber before the DUP vote took place. One senior party source at the meeting described the atmosphere to PA as “a total shambles” and another as “dreadful”.

The late night deal, after intensive talks involving Northern Ireland Secretary Brandon Lewis and representatives from the DUP and Sinn Féin, had appeared to have lifted the impasse and paved the way for the Executive to continue.

However, today’s events have overwritten any progress, and the battle for the future of the DUP resumes, with former candidate and MP Jeffrey Donaldson and MP Sammy Wilson among the contenders suggested at this early stage.

– With reporting from Rónán Duffy and the Press Association.