How to build a holiday rental in your back garden 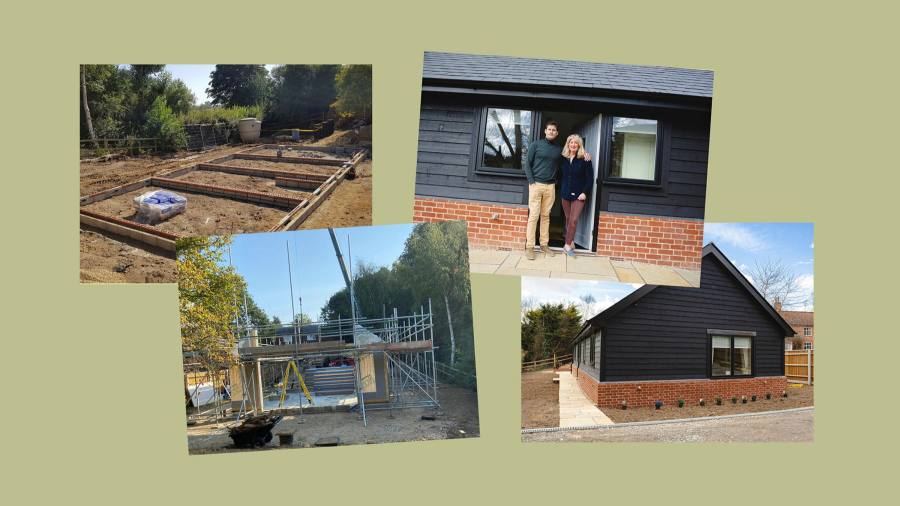 In the summer of 2018, my wife Jane came in from mowing the lawns complaining about a neglected area of our large Suffolk garden. “It’s a real mess, and I can’t manoeuvre the lawnmower,” she said.

The area in question is to the side of our garden, surrounding a disused garage and a dilapidated barn. Some months later, I received a letter from a developer suggesting that this very area had potential to be developed.

Discussions with the developer revealed that our plot had several things going for it. Being on the edge of a popular Suffolk village meant demand by buyers or renters would be very strong. It had existing vehicle access, separate from ours, and being in a slight dip meant the roofline of any new property we built there would be well below ours and our neighbour’s houses.

Plus, because there’s a large amount of space between our houses and the site, the chances of us getting planning permission would be increased.

So, I thanked the developer for his interest and said goodbye. If anyone was going to develop a property on my land, it would be me.

Now the project is finished, we intend to let the property as a holiday home as soon as coronavirus restrictions allow. With so many in the UK planning to forgo foreign travel this summer, I’m sure others are thinking about doing the same.

But is it right for you? Here’s a step-by-step guide for how we did it, which may help you decide.

Because our house is Grade-II listed, planning approval would be in the hands of one of the planning department’s heritage officers. In the 23 years that we’ve lived here, we’ve done two major extensions and found that heritage officers can be well-meaning but hard to please.

I consulted self-build specialist Potton, based in Cambridge. Potton has an experienced design and planning department, which will carry out an initial evaluation of a building plot at no charge. Its assessment of my garden plot wasn’t encouraging: that it was unlikely I’d be able to get planning permission, given my home’s listed status.

Undeterred, I engaged a company of architects that specialises in dealing with listed properties. We sought pre-planning advice from the local authority’s heritage department to ascertain the development’s feasibility and what might be acceptable.

The heritage officer who visited the site wasn’t against development as long as the new structure was “subservient” to my listed home next door. Our spirits lifted again.

My architect came up with a two-storey, four-bedroom contemporary design with wooden cladding. This approach did not go down well. The heritage officer’s response to our formal planning application was that it was too domestic, too large and not sufficiently “subservient” to my home. We hastily withdrew the application to avoid a formal rejection.

The heritage officer advised that he would be happy to support development if it was of a smaller, more straightforward barn style. The new property could be bigger than the existing structure, but must look like a barn conversion, with a much lower roofline than initially proposed.

We resubmitted a simpler rectangle-shaped, single-storey, two-bedroom barn-style design with a brick perimeter outer lower wall and black cladding above. Planning permission was eventually granted in October 2019, but with several conditions about materials.

Deciding on a construction method

Brinkley’s book sets out the entire process of building a house; the different construction methods, best practices, regulations and things to consider. It also explains how to project-manage the build and gives a helpful example project schedule showing the build sequence.

I also made extensive use of Potton’s online self-build resources. One of its planning consultants, Mark Day, patiently spent time discussing my project and making helpful suggestions and comments. This gave me the confidence to project-manage the build myself. That won’t suit everyone, so make sure you engage someone competent if necessary.

I opted to use Potton’s Ultima Structural Insulated Panel (SIP) build system to create the structure based on quality, speed and energy efficiency. The cost is similar to block and brick. Potton appointed a structural engineer and assigned a dedicated site manager to oversee the project. I also decided to go for Potton’s weathertight package, which meant they took responsibility for engaging contractors to supply and fit the roof, windows and doors.

We decided to install underfloor heating in the holiday let, powered by an air source heat pump (ASHP) and hot water from a heat exchanger. An ASHP is brilliant in a highly insulated property like ours and is very green if you buy renewable electricity. It would also attract the UK government’s Renewable Heat Incentive payment for seven years, which would repay most of the installation cost.

I needed a builder to do the groundworks, finish off the building’s interior and exterior and do the landscaping and driveway. The builder I’d previously used on my own home wasn’t available for at least a year.

So, I scoured various building directory websites and found three potential local companies on mybuilder.com. You can tell a good builder by the quality of their questions, how many notes they take and their observations. Dan Haselton from Haselton Construction ticked all those boxes. His price wasn’t the lowest, but I felt confident that he and his team would deliver a quality job.

Due to the unfolding pandemic, one of Haselton’s upcoming projects had been deferred. As a result, they could start my project on my preferred start date in mid-July 2020.

I felt that Dan was someone I could work with and, most importantly, trust. A great relationship with your builder on a self-build is essential for your blood pressure, sanity and marriage.

We split the building contract into three phases. Phase 1 included groundworks, sewage plant installation, foundations, drainage and the block and beam floor. Phase 2 was the supply and erection of the building structure and making it weathertight, all handled by Potton. Phase 3 included the internal fit-out, kitchen installation, external brickwork, cladding, patio, paving and driveway surfacing.

I estimated the entire build cost to be about £215,000, including a £20,000 contingency. I could have borrowed the money against my home cheaply or taken a more expensive self-build mortgage. But I no longer use debt for anything these days, so I funded it entirely from savings.

FT subscribers can sign up for our weekly email newsletter containing guides to the global property market, distinctive architecture, interior design and gardens.

Most property investors will say this is an inefficient way of funding the project because my capital would be “trapped” in the property. To me, it meant that I didn’t need to worry about meeting monthly repayments. Plus, I didn’t have to jump through legal and financial hoops to satisfy a lender’s loan security and affordability requirements.

Because I didn’t intend to live in the property, I was liable for the Community Infrastructure Levy (CIL). The CIL is a development tax based on the property size, which amounted to about £5,500. Half was due on commencement of works and the rest after three months.

Something to watch out for is that demolition of old buildings counts as “commencement” for the CIL. Failing to notify the local authority before starting demolition means the levy becomes immediately due in full — plus a surcharge of 20 per cent!

All stages of the build went surprisingly smoothly. The only dramas arose during groundworks. We found an old cesspit when digging the foundations, which required additional reinforcement. We also encountered an underground spring after digging a deep hole for the sewage treatment plant, necessitating hiring a bigger digger, metal supports and a lot more dry mix.

We filmed every stage of the project and created 20 videos. You can watch these on my YouTube channel at Jason Butler Financial Wellbeing.

Overall, we spent nearly £2,000 more than the £20,000 contingency, due to choosing higher specification materials.

We finished the build in late February, eight months after we started. We have a spacious, modern and well-equipped house sympathetic to its surroundings.

For less than £25,000, we could also add a third bedroom and home office in the truss roof area above the existing bedrooms. And there is space outside to put a high-quality insulated garden room or office for £15,000 or less.

I’ve enjoyed the self-build project. The knowledge and experience gained will prove invaluable when I eventually build our new (and hopefully final) home sometime in the next few years.

If you’ve been thinking about doing a self-build, why not do something about it? All you have to do is research, find a suitable plot, choose a build system, select a decent builder and work out how to finance it. Easy — kind of.

With global travel severely limited by coronavirus restrictions in 2020, stays in short-let accommodation dropped sharply, leaving many hosts dealing with an unexpected loss of revenue. This year, with a question mark still hanging over international holidays, Airbnb bookings are returning, but have risen much faster in some locations than others, according to AirDNA, which tracks the short-term rental market.

As of March 29, the number of summer bookings in city locations was still much lower than it was in March 2019, the last “normal” year for the tourism industry.

However, in some rural and coastal areas, Airbnb bookings for this summer have grown rapidly, surpassing numbers seen in 2019.

The number of active Airbnb listings has dropped in many countries, AirDNA reports, with Canada seeing the biggest fall — down 11 per cent in February year-on-year. The number of active listings in France has grown in the past year, rising 9per cent over the same period.